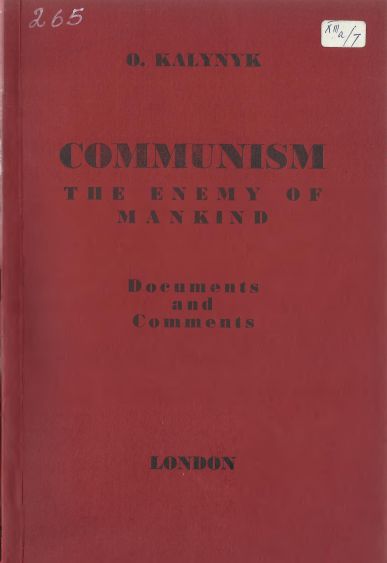 For the average man in the street in any of the Western countries, it is almost impossible to imagine the depths of human misery to which Communism has brought millions of people inhabiting vast territories from the Alps to the Pacific.
The comforts of civilised life, regular and varied entertainment, plentiful and easily obtainable food and other objects of everyday use, the pursuit of money and material satisfaction, accompanied by a growth of religious indifference, arc only too apt to favour an attitude of carefree self-content and a convenient insensibility to the sufferings of a distant fellow human being. Often no amount of explaining is able to produce as much as one word of sympathy from the lips of people who may yet profess very progressive and elevated humanitarian ideas.
The world, however, is one, and, even though it may be to a slight degree, we should all hold ourselves responsible for the sufferings of other human beings wherever they may be found. Oleksa Kalynyk, the author of the well-documented book now presented to the reader, has done, I believe, a great service in the cause of awakening those hearts still able to feel, and in opening minds not blind to truth, to the great tragedy of those human beings and whole nations who have had the misfortune to fall under the Communist tyranny. He draws the Iron Curtain just a little aside to allow us to obtain a penetrating glimpse into the life of Ukraine at the time of the forced collectivisation. With the aid of first hand and irrefutable evidence drawn only from one district of Ukraine, which is, however, typical of the whole country he exposes the brutality of Russian policy towards the Ukrainian peasantry, and the hypocrisy of Moscow’s propaganda about "happy” life in the Soviet Union.