The Ukraine. A Submerged Nation 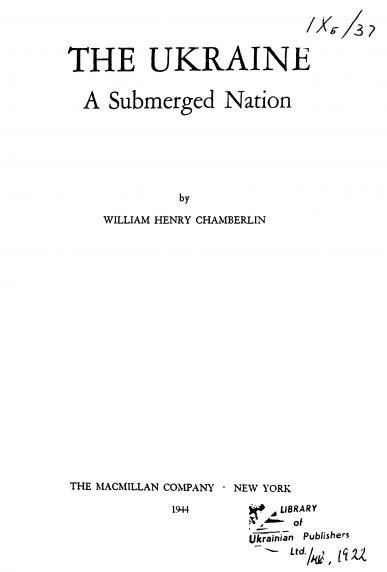 "Throughout the book the names of Ukrainians and of Ukrainian cities, towns, places, etc. are spelled according to the Ukrainian pronunciation of them.

The Ukrainians are the most numerous people in Europe without a sovereign state form of organization. There are well over forty million Ukrainians in the world, over thirty-two million in the prewar Soviet Union, from five to six million in Poland (Polish and Ukrainian statistics arc contradictory), a million and a half or two million in Bessarabia, Bukovina, and the Carpathian eastern province of Czechoslovakia. There arc about a million Ukrainians in the United States, between three and four hundred thousand in Canada, a smaller number in South America.

There is a Ukrainian language, a Ukrainian culture, a Ukrainian historical tradition. Ukrainian folklore is rich and original and in more modern times there have been great Ukrainian authors and scholars, such as the national poet, Taras Shevchenko, the brilliant satirical novelist, Nikolai Gogol, the humane gifted storyteller, Vladimir Korolenko, who wrote in Russian, the leading Galician poet, novelist and scholar, Ivan Franko, the historian and nationalist political leader, Michael Hrushevsky. But efforts to organize an independent Ukraine, apart from the Kiev state that flourished in the tenth and clevcndi centuries and went down before the Mongol onslaught in the thirteenth, have always been frustrated.

The two periods when the dream of a Ukraine free from foreign rule were most nearly realized were in the middle of the seventeenth century, when Bohdan Khmelnitsky led his fierce rebellion of the Ukrainian Kozaks and peasants against Polish rule and in the years immediately after the end of the First World War". (W.H. Chamberlin)