“My Friend the Enemy” Film Review 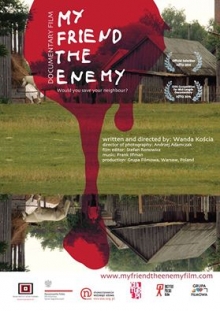 Throughout history, Ukraine’s relationship with its neighbours has at times been difficult and often traumatic. For Ukrainians and Poles the chapters on Bohdan Khmelnytsky, Jozef Pilsudski, Volyn tragedy and Aktciya Visla convey differing emotions and memories on both sides of the divide. My Friend the Enemy film, directed and written by Wanda Koscia was shown at University College London, School of Slavonic and Eastern European Studies on Thursday 19 March.

The documentary film told the story of Polish, Ukrainian survivors and witnesses of the Volyn tragedy in 1943. From a Ukrainian perspective the events that unfolded in the region of Volyn-Polissia are for most part termed a ‘tragedy’ while Polish historians, writers and politicians use the words ‘Volyn massacres’.

The two main characters of the film Janina Dobrzecka and Romuald Drohomirecki who were children in 1943 vividly recall their childhood memories and visit the Ukrainian families who saved them from certain death. Together with other survivors and witnesses they tell the story from a Polish and Ukrainian perspective. A human dimension of understanding in which the events that unfolded in the villages Pendyki, Diuskyn and Huta Stepanska are told graphically by survivors and locals.

Neighbours and friends that become embroiled in the horrors of war between two despotic powers and dictators. One cannot escape the fact that Volyn in 1943, apart from the German occupying administration had many insurgency units. Ukrainian Insurgency Army (UPA), Armija Krayova and Red Partisans. We can also add collaboration by the local population, whether with the Germans or Red Partisans. This added another factor to the volatile situation.

During the film we constantly hear the term ‘nationalists’ and ‘Banderites’ when it comes to describing the perpetrators of the hideous crimes inflicted on the local Polish population and on some occasions the local Ukrainian population. A Ukrainian witness makes the point that if it was not for the ‘Banderites’ the local Polish population would have destroyed us all. The film does allude to the fact that ‘Banderites’ collaborated with the Germans. I think that many years of miss-information regarding the role of the Organisation of Ukrainian Nationalists and the Ukrainian Insurgent Army during World War Two has played a major part in forming opinions and facts regarding both.

There were Ukrainians that collaborated with the Germans, as there were collaborators in other European nations. Why though is it commonly portrayed that a Ukrainian collaborator had to be by all accounts a nationalist. I am yet to be convinced that both organisations are guilty of collaboration on a scale portrayed by many historians and writers. The fact that we have so few publications in the English language about OUN and UPA does not give many academics the opportunity to thoroughly study the subject. Translating Petro Mirchyk ‘History of the Organisation of Ukrainian Nationalists – 1929-1939- Vol.1’ would be a big step forward.

During various discussions throughout the evening at a screening which was well attended one did not feel on the whole any animosity towards Ukrainians but a sense of trying to understand why these terrible events unfolded. Wanda Koscia has to be commended taking on such a difficult and traumatic period and conveying this on film.

One is left with the thought that after so much bloodshed we as neighbours, who both have had a traumatic history have to find issues that unite us and do not divide us.