Листівка проти російської окупації України «Russians get out of the Ukraine!» 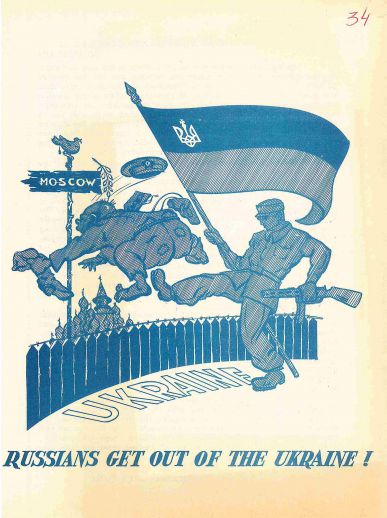 WE HAVE NOTHING AGAINST DANCERS FROM UKRAINE ...

you may be wondering why we are putting on this demonstration. We are ordinary people with homes and families, and love the comfort of both. However we happen to be Canadians of Ukrainian extraction, the people who had the misfortune of becoming victims of the Russian imperialism and have been held in Russian bondage for centuries. Therefore we deem it our sacred duty to do all that we possibly can to aid the cause of our brothers who are being trodden down by the Russian horde. At the same time we wish to utilize this opportunity to inform our fellow Canadians about the Russian expansionist design for achieving world supremacy in which design they have included Canada.

You may be inclined to feel that Canada, being a part of the North American continent, is too well secured against invasion by the Russian horde. We wish to point out that the Russians expect to dominate this continent within the present generation. When Krushchev said “we will bury you” and emphasised it by pounding the table with his boot at the General Assembly of the United Nations, he was not joking. The Russians have long ago declared a war against the free world and consider themselves as being in a state of war. True enough, it is not a shooting war but it is a war nonetheless. It is a war of penetration of subversion, sometimes flagrant and sometimes camouflaged with song and dance, but always calculated to undermine the morale of their adversaries. You do not know the Russians as well as we do, therefore you may be inclined to regard their artistic exhibitions as something aloof from war and politics. (...)